Wander Woman. I found these two words on a shirt at a flea market in Indiana this summer, and I had to buy it. Mentally, I could hear my husband laughing all the way in Alaska. I cannot count the number of times he has looked at me and said, “You have the worst wander lust of anyone I have ever met.” This comment leads me to smirk and say, “You should thank God daily that I do!”

Will and I met in college while working at a Salvation Army camp in Wisconsin. He was earning a Biblical studies degree from a school in Minnesota, and I was attending Grace College in Indiana for my degree in elementary education. Even then, I knew it was a sign of the life we were going to live together/apart. 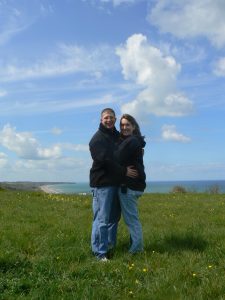 On the beaches of Normandy

We both graduated the same day in May. Three weeks later, we were married the same day in June. August of 2001 found us moving across the country to Bellingham, WA. Will started attending Regent College in September for his Masters of Divinity (for those who have done the math – yes, he missed two of his first three weeks of seminary due to the border closing after 9-11), and in October I finally landed a teaching job and was able to quit working at Taco Bell.

We lived in the area for five years. I will spare you the long version of the story, but in this time we both earned our masters. Mine is in Designing Curriculum, Instruction, and Assessment. We also had our first child, Gabriella, and seriously considered settling down and living a pastor’s life. God made it clear that this was not the path for us, and Will spent his “gap year” after seminary working on the process of switching his reservist commission over to an active duty commission as a Chaplain in the U.S. Army. 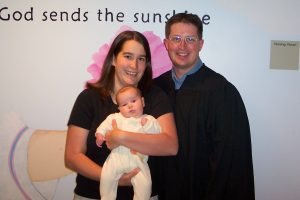 Gabriella – Our ‘Graduate from Seminary’ baby

September of 2006 found us at Fort Bragg, N.C. We had a 19 month-old, and I was 8 months pregnant. He came home from his first day of work to inform me that he would be deploying to Afghanistan in January…and so the true wandering began. We spent four months at Fort Bragg, during which time we had Mikayla join our family, and then I moved home with my parents for a year. Then there were six months back at Fort Bragg before our official first PCS (Permanent Change of Station for my non-military friends) to Germany. Three-and-a-half years in Germany gave the opportunity for much wandering. By the age of 6, my oldest had been in about 15 countries and 38 states. Our son, William, was born during this time as well. Traveling Europe with an infant is not for the faint of heart! After Germany, we were in Colorado for just under two years, then South Carolina for six months, then Anchorage, Alaska for just under two years, and now finds us in Fairbanks, Alaska awaiting word of where we will be heading next summer. Our 2010 van sits outside dying a slow death by transmission issues with 159,000 miles on it. 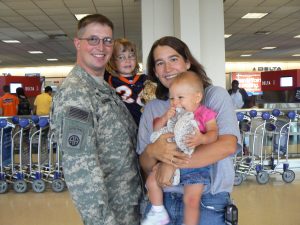 Mikayla – Our ‘Join the Army’ baby

With all the moving, homeschooling just made sense. Well, I should say that it made sense to me from the start. Will, however, was not a huge fan of the idea of homeschooling. In fact, before marriage we had come to the agreement that I could homeschool for kindergarten, but after that they were to go to public school. Gabriella was scheduled to start school while we lived in Germany. At the age of 3, she had already passed the END of kindergarten requirements for the local D.O.D. school, so I started praying.

One night, Will and I were sitting in the living room. He was reading through his news on his laptop when, all of a sudden, he slammed his hand down on the table next to him and said, “That’s it! I can’t take it anymore. You are homeschooling through high school.” I had not said a word to him about my concerns, so I about fell over in shock. Turns out that he had been doing a lot of reading and was seeing how, more and more, schools are not teaching kids to think and process. Personally, I felt like he jumped too far too fast, so I told him we should just take it a year at a time and see how it goes. (Me? Teach high school? Gulp!) He replied with, “Yes. A year at a time. All the way through high school.” 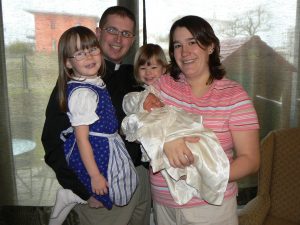 So here we are in our quest. In Fairbanks, Alaska and on our ninth year of homeschooling. Gabriella is a freshman this year, Mikayla is doing 7th grade, and William is working on 4th grade. What seemed so scary and overwhelming nine years ago has become the joy and blessing of our lives. A friend asked recently, “I know you use textbooks, so how do you keep your homeschooling interesting?” I laughed and said, “We live our education. We studied world history in Germany, went to Berlin to see the bust of Nefertiti, and stood on the rock of Gibraltar to discuss the size of the Roman Empire. In Colorado, we studied landforms and surface features. We drove up Pikes’ Peak, to a glacier, and to the Grand Canyon. Grandma and her garden were only 90 minutes away, and so we learned about plants. I timed American history for our time in South Carolina and we visited D.C., museums, and battlefields. In Alaska, we have lived in nature, and we talk. We talk all the time about everything.” Homeschooling has bonded our family together, and it has provided our kids with the most integrated education. 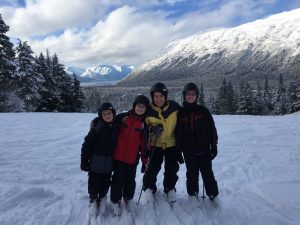 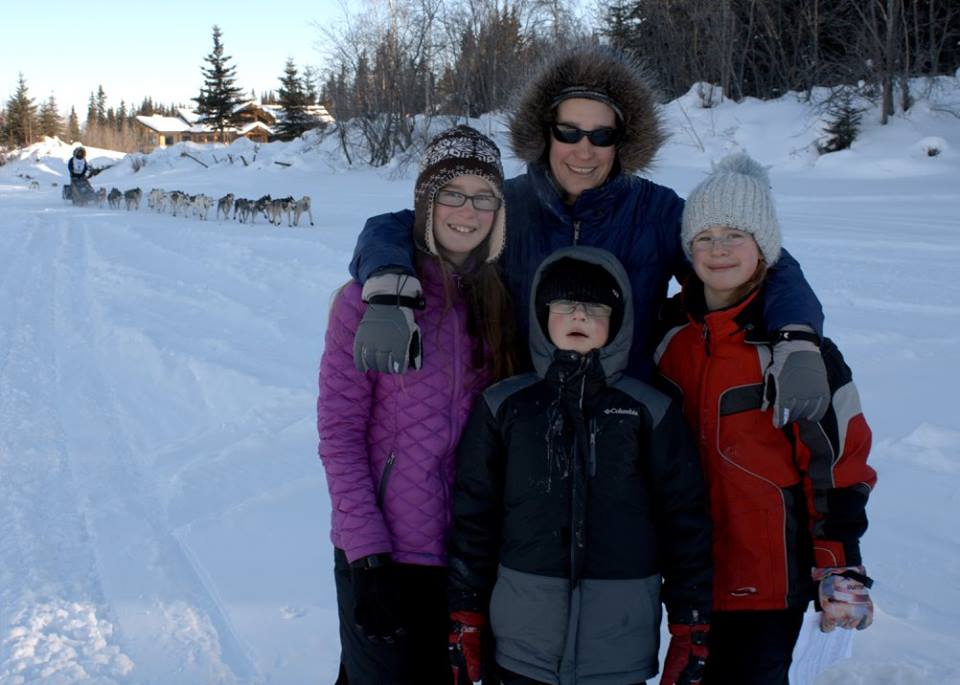 I do not think I can ever teach in a public school again. In public education, your hands are tied. You are only allowed to teach 25% of the child: his mind. Nine years have shown me the joy of teaching 100% of the child: his mind, his body, his heart, and his spirit. What an amazing quest! Can I help you with your quest? 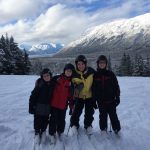 ...a self-avowed "Wander Woman," homeschools her three children while traipsing the globe with her Army Chaplain husband. Her third greatest passion, falling below her love for God and family, is empowering other parents to teach their children.

NOW WHAT? A Guide to Teaching Reading after Phonics

A guide to teaching reading in grades 2-8 which includes strategies, best practices, and practical activities.

Whoops, you're not connected to Mailchimp. You need to enter a valid Mailchimp API key.

...a self-avowed "Wander Woman," homeschools her three children while traipsing the globe with her Army Chaplain husband. Her third greatest passion, falling below her love for God and family, is empowering other parents to teach their children. 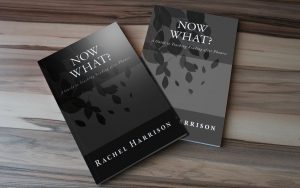 NOW WHAT? A Guide to Teaching Reading after Phonics

Get Updates to Help On Your QUEST !

Whoops, you're not connected to Mailchimp. You need to enter a valid Mailchimp API key.